First I would like to thank everyone for all support and encouragement! I did not feel very confident going into the race and sharing my doubts and thoughts worked as a great therapy.

To start with, I could say that this was probably my best race ever. Not because it was the fastest, though I did PR by approximately 9 minutes as compared to last year, but because of the way I felt throughout the run. Everyone who has ever run 42.2 km knows what it is a long and winding road from start to finish and you can go from feeling great to being totally miserable in less than a minute. I can say that I felt great 90% of the race, and that was absolutely awesome!

The race morning I woke up at 4 am, had my breakfast of coffee and 2 peanut butter toasts, got dressed and we headed out at around 5:15 am. That morning was extremely foggy and by the time we parked and started walking to the start line it was around 6:45. There was a huge crowd of 10k runners that were starting 30 min after the marathoners and the start line looked to be still pretty far away, so I decided to leave my boys and run to make it on time before the gun. I think that little run worked as a good warm-up and I was able to settle into my goal pace of 6:00 min/km (not per mile unfortunately lol) pretty much from the very beginning.

The start and finish location of Dubai marathon for the last 2 years it pretty spectacular – right near Burj Khalifa – a great landmark that you see in front of you for the majority of the second half of the race and it gives such a great mental boost almost “seeing” a finish line! 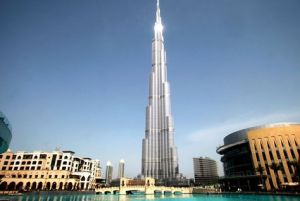 The first 2-3 km where the usual hype with people chatting, trying to settle into their paces, some brave (aka stupid) souls sprinting  through the crowd, and just enjoying the whole atmosphere. And then at around 3rd kilometer a disaster struck – bbbbbaaaam! my sports bra strap got unclipped!  Boys can skip the next paragraph by the way…

I run in Shock Absorber bras – and I totally love them! This is the only running bra that does not chafe and it is also super-comfortable and supportive. Unfortunately I’ve had this problem of their straps getting unhooked at the most unsuitable moment several times before.

Anyways, by the time I managed to inspect the damage and hook the straps back together again, while still running, I was super pissed-off and sweaty. I am sure people around me were wondering why this idiot woman is wriggling like a worm on a hook and what exactly she is trying to do.

The next 30 kilometers passed by very fast.  The course is out and back on Jumeirah Beach Road, and while the road itself is not particularly impressive and lined up with villas and numerous dental and laser surgery centers, it was great to watch elite runners zoom past on their way home. Watching all the fast guys and girls kept me busy for several kilometers.

My major fear was to get GI problems. Every race-related nightmare that I have is about me running down a street lined with screaming supporters and volunteers, desperately searching for a porta loo and not finding any. Thankfully Digestion Gods were kind to me and my stomach held up pretty well.

Last year I was a total miserable bitch throughout the run and was not really happy with that, so this year I had a goal of being as sociable as possible.  I met a couple of friends and chatted with them on the way, hi-fived kids and tried to thank as many volunteers and supporters as I could. Also met a triathlete Ed Hawkins who was running his second marathon on that day as part of the self-supported Ultraman Challenge to raise awareness for diabetes – this guy is a real hero! I truly believe that this attempt of trying to be grateful paid back in terms of the amazing energy I was getting from people and I did not really notice how I hit 36 km mark.

This is when my left knee and right ITB started hurting pretty bad just as was expected. It was only 6 km away from the finish line and I was not bonking so I knew I could run though the pain and finish strong. And that is exactly what I did – tried to overtake as many people as I could and sprinted the last mile to the finish line.

I saw my boys right before the finish and was super happy to spot a medal around Jo’s neck – he ran his first ever race of 3 km and finished sprinting in 19 minutes – not a shabby time for an 8 year old kid!

Crossed the finish line, got my medal and goody bad and then legs seized up – hams and calves refused to cooperate! I tried not to stop and keep moving around to ease the pain and finally found  quite an unconventional remedy – a cut of vanilla ice-cream! Seriously, ice-cream never tasted better and even the pain subsided! Benefits of “icing” after the race are undeniable!

I am not an experienced marathon runner as I ran it only here in Dubai, but I can say that the race organizers did a great job! There was more than enough water and Gatorade on the course, in fact there were water stations every 2.5 km, so water was never a problem. Unlike last year they were not giving out GU gels on the course but that did not bother me much as I carried all my food with me.The start and finish areas were pretty well organized, there were enough washrooms and showers and human traffic was directed well. The only disappointment was the finishing chute for the marathoners – just like last year it was a narrow corridor since the majority of the road was fenced off for 3 and 10 km races, though I do understand that there are many more people running 3 and 10 km and the finishing times are overlapping.

Now, analyzing my previous and this year races, I do believe that our attitude plays the major role in a way you feel and perform during the race. I’m not saying that one shouldn’t train hard and just go there with positive attitude hoping to break the PB! Most of us do it for fun, because we love the purity of such a simple primal activity as running, because we enjoy the challenge. Getting PBs is important, but it is even more important to just enjoy and be grateful that you can do it! Another thing that I realized is that I need to give back – this year I will definitely volunteer for some of the races that I don’t run to help out on the course or marshalling.